At 14 weeks of my pregnancy we found out we were having a child with myelomeningocele spina bifida and hydrocephalus. I was totally terrified what the future held for all of us. But we kept on going. We were told so many things from the point of aborting my pregnancy at 20 weeks – to my child will be a vegetable. But that was not going to happened.

At 32 weeks I was told I would need to deliver but I refused. The doctors told me he was fine. So I fought to keep him put. I held out to 40 weeks. September 17th, 2011, via C-section at 5:45pm Abel J.T. Rose was born. Abel was screaming and kicking his way out. I was so proud to hear that cry. After that they wrapped him up and put him next to my face to kiss him and off he went to the NICU and his dad followed and stayed with him. He was perfect in every way. 7.14lbs and 19 in long. After I came to a little better they took me to see the little man. At that point I remember being wheeled in still in a bed to see him. My heart hit the floor and I started to cry I felt this is my fault it was a awful feeling. But he was still perfect. But after of about 10 mins they took me back to my room and updated us and he was going back to have the back closure. At that point we where told his opening was in a very odd spot a that they normally don’t see open. They couldn’t tell us really anymore then that.

After surgery I was able to go see him. He was such a big boy breathing on his own and no pain meds after surgery they said everything went great and I seen his little eyes open and he grabbed my finger it was love. He knew I needed him to let me know he was ok. And few day passed and then a VP shunt was placed. His head was pretty good size at that point and 3 days after birth the shunt was finally placed. His head began to get smaller and smaller in passing days. He was in the NICU only a week and we went home. 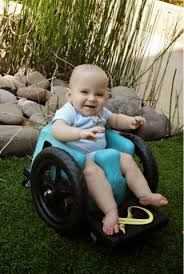 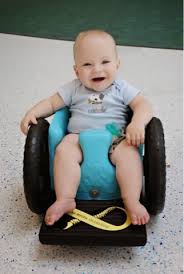 When Abel was 6 months old my husband built his first wheel chair and he took off at 9 months in it and has never slowed down. At 12 months he got his first wheeled stander and so on and so on the equipment. We figured out no matter what equipment he’s put in adapts too very quickly. His first wheelie I will never forget.

First time he got his Mike Box Designs chair (https://www.facebook.com/mike.boxdesigns?fref=ts)  he sat and smiled and popped it back. He was only 17 months old at this point. And he went flying through the house in the chair laughing and giggling at that point he became the fearless kid you know today. Today things have gotten at little easier he is so Independent. And I write this to let other parents and adults know its not the end of the world. Anything is possible never stop trying. Abel is no different from anyone else and Abel can out roll most running adults.

What was your biggest fear?

My biggest fear was how his health would be for the rest of his life.

What has been your biggest surprise?

There are new surprises everyday with Abel.

Abel is quickly becoming known for his wheelchair accomplishments and mobility. How did that come about?

We actually have no clue. One day we went to a Life Rolls On – They Will Skate Again (http://www.liferollson.org) and next thing you know he’s everywhere and has thousands of followers.

What are Abel’s biggest challenges, day to day? Physically and Health?

None. Nothing stops him.

Do you have other children? How does she/he/they adapt to Abel’s birth and needs?

Yes we have a 6 year old daughter who has high functioning autism. There where a few challenges, mainly Jealousy -but now she loves her brother and they are good friends.

What’s one thing you want to share with other parents?

We agreed to let Abel stay in the spot light because other parents need to see and let their kids get out there and try new thing no matter what the ability is. The earlier the child is placed in a chair the better for earlier independence. Also adults seeing him lets them be Inspired that no matter what, you can do anything.